Review: Ready or Not

“Ready or Not” was a movie with a lot of excitement, positive hype, and cheering among the general population. Naturally, I avoided it until it was available to stream/rent. On a personal level, I have been in nearly 20 weddings myself and a guest closing in on 50. I’ve watched people get married for all of the reasons you can imagine. Because they were in love or because they were afraid to be alone.  Some because they thought it seemed like the next natural step in the relationship hand-guide. I’ve even seen people get married for their love money.  People get married for all kinds of good and bad reasons.  From black tie to renaissance themed weddings in the backwoods, I’ve seen it all. Except maybe for an after-party like “Ready or Not”, which might inspire people to take those vows a little bit more seriously.

“Hey, you wanted to get married.” 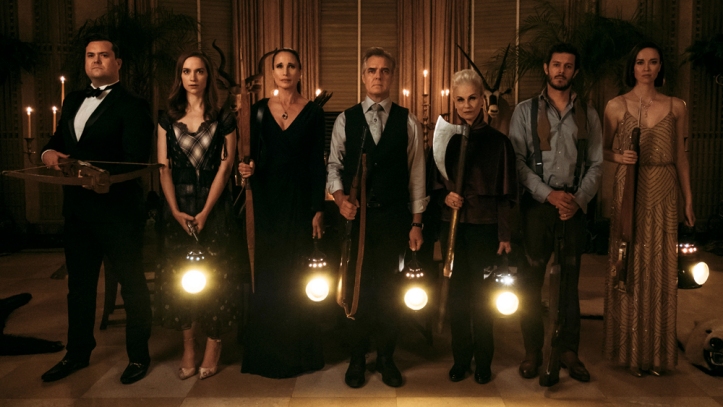 “Ready or Not” is comedy dressed up in horror, but in it’s deepest core it’s a satire about the uber-rich and knowing who or what you are marrying. The plot is simple enough. A beautiful young bride is marrying “Mr. Perfect” who also happens to be “Mr. Rich” and everything including the ceremony seems to be going just as planned. That is until after the ceremony where the family announces they have a ritual game they play before the marriage can be officially consummated.

Our glowing yet suspicious bride agrees as rich folk can be a bit eccentric. Eccentric would have been a kindness. There is a “lotto” where the bride randomly picks a game.  Of all the games she chose the one “bad” option.  And it’s hide and go seek. Little does she know the rules are, once they find her, they must sacrifice her.  This is when demented humor and the real party begins.

It’s ridiculous, but as the bride Grace (Samara Weaving) also chuckles at the insanity of her predicament it suddenly does become all too real. She’s not a damsel in distress, nor is she inept like the bumbling fools coming after her. You don’t necessarily experience a lot of tension or worry for her character, though she is mercilessly pursued even though her attackers are incompetent at best.  There still are more of them, and with their resources things don’t look good for her.  Even with her newly beloved trying to help her along the way. It probably doesn’t sound amusing at all, but the comic beats are on point and Samara Weaving is great. By the time you hit the payoff of at the ending you definitely feel you’ve earned it.

“Ready or Not” is a fun ride. An absurd ride, but a lot of fun. The macabre theme and almost “Clue” style of the game controlling mood keeps the story light-heated. Make no mistake, this is a dark comedy and the violence is pretty graphic. Our protagonist goes through hell (not unlike some marriages) and it shows. But if you’re up for some off-kilter darker fun with some “tee hee” in your sensibilities I definitely say watch this. And if you’re engaged or thinking of getting married….watch this for sure.