Because it’s been well noted that I don’t often go see films that are hyped as excessively amazing and “It” was not different. “It” was the first Stephen King book I had ever read. My mom had a copy stuffed under her bed. I discovered it in a very intense game of hide and seek with my brother. I knew I wasn’t allowed to read those kinds of books, but I grabbed it and took it and read it under my bed during the day and using my alarm clock light at night. This was very common for me. As a young child I had insomnia and would stay up nights reading or in a state of terror or panic.

I read it fast and I fell in love with it, and not long after I watched Tim Curry bring Pennywise to life, but I wasn’t scared. I just loved it. The bottom line, “It” had extremely high standards to live up to, outside of what the general public was raving about.

“What a nice boat. Do you want it back?”

Fast forward to today, and I’m celebrating my favorite month of the year by watching a scary movie every day. Some I have seen, some I have not. Today I turned on “It” and was not let down. This was a spectacular horror film. All of the things I loved about the book and even the original film were captured here.  Yet, it still managed to tell its own story with the benefit of updated special effects and terrifying make-up.

This time the story takes place in the ’80s with the same group of kids and poor Georgie and the sewer. We meet a new Pennywise almost immediately and he’s terrifying. The outcasts eventually all find each other and connect, but they also discover they are all experiencing what seems like something Supernatural. They realize they aren’t just being tortured individually, but by the same thing. And like Watson and Holmes, they put the pieces of the missing kids every 27 years together.

The score takes you on an eerie tour of Derry, the lovely East Coast town that looks about as pure and innocent as you can imagine. The horrors don’t always take place or in the dark, but in plain sight, in public even. There is no escaping “It”. With magnificent set designs, the score, and effects all working symbiotically you experience the full effect of what horror can do. This is a living nightmare and you are there experiencing it right with the kids. 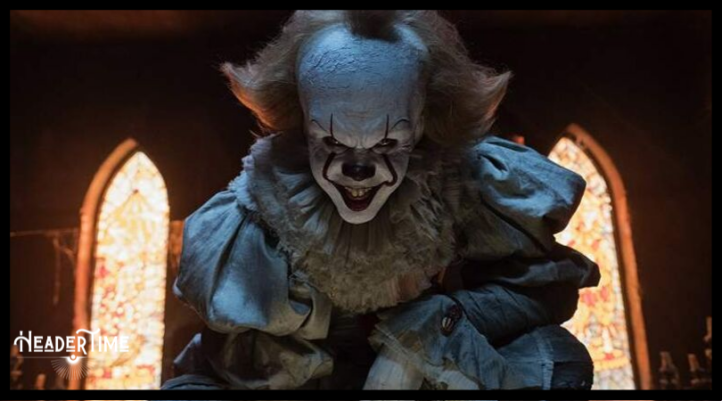 I always get frustrated when I’m yelling at the screen for the character’s not to do dumb things, or split up when it’s obvious they are walking into a trap, but it actually works in “It”. The payoffs aren’t about gruesome ends or scary jump out tactics, though when those happen they strike fast and hard. It is quite literally terrifying. The fact that this is all happening to children just amplifies the terror. Because of the mix of sound and score it feels otherworldly.  It’s extremely powerful and fuels the sense of impending doom. It’s intense.

Bill Skarsgard’s Pennywise is very different from Tim Curry’s and that’s not a bad thing unless you’re a kid from Derry. He’s enigmatic. The way he distorts his voice uses his very tall physicality to contort his body, and even with makeup and the use of CGI, his facial expressions are terrifying. The children cast as Bill, Eddie, Richie, Beverly, Mike, Ben, and Stanley are all wonderful. Sophia Lillis is absolutely incredible and what she has to go through is awful.

“If we stick together, all of us. We’ll win”

You invest in the characters; you may very well see yourself in one of them. When you care what happens it elevates the terror each time Pennywise tortures them or they are in peril. You cheer when they first get the strength to stand up to the bully’s.  This ultimately leads to them standing up to Pennywise and facing their fears, which is really what “It” is about. It’s about confronting your fears and dealing with them. As an adult or a child.