It was not an easy concept to embrace a new Hellboy.  It seemed insane to make another movie without Guillermo de Toro and Ron Perlman.  Del Toro was not offered the opportunity to write and direct the film, and Ron Perlman refused to return without del Toro’s involvement.  They replaced de Toro with director Neil Marshall.  In general, I actually enjoy his work and the cast featuring Ian McShane helped inspire me to keep an open mind.  Even with that open mind and the hope of great action, costumes, cinematography and effects there wasn’t much that could save this disaster. 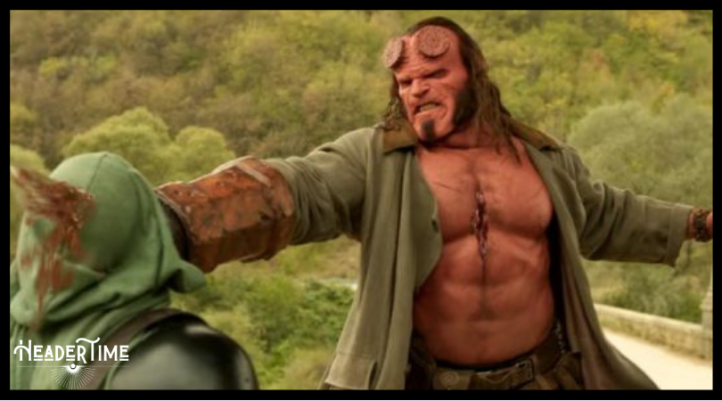 We go back to Hellboy’s origins and do some mixology with Arthur, Excalibur and Nimue.  Played by Jovovich, she’s an ancient evil witch who wants to unleash a plague on mankind.  Because you know Arthur, Merlin and co.’s mythology hasn’t been beaten to death across every other medium.  Yes, this related to the source material, but it wasn’t explored in any new way that made it worth watching.  But, that’s not all.  Some boar-like fairy (okay) seeks revenge on Hellboy for assaulting him in his youth and goes to the monster/demon Baba Yaga to resurrect Nimue.  Then he’s betrayed by allies, finds a psychic buddy friend also connected to the story, might be betrayed again, and then he might betray everyone because……yeah.

David Harbour wasn’t bad, but he wasn’t right and that’s not his fault.  Like many roles it’s hard to replace a character as iconic as Hellboy with another actor, but mostly when the actor is still alive and ABLE to play the bloody role.  I’m not blaming this on David Harbour, but it was the equivalent of having someone other than RDJ play Iron Man.  Even though the rest of the cast had some actors I enjoy like Milla Jovovich, Daniel Dae Kim, and Ian McShane nothing connected.  Part of the problem was the choppy dialogue and general inconsistency in the tone.

As a viewer you got the sense that the whole gig was contrived.  In my mind the pitch for it went something like this:

“People want another Hellboy movie, we should do that.  Do you have any ideas?”
“Sure.  I like King Arthur, let’s do that.”
“What’s the plot?”
“Magic and witches and stuff.  Throw in some funny lines.  Hire Neil Marshall.  That guy does dark monster stuff really good.  Then………..fade out.  That’s it.”

I doubt much more went into the plot, the characters, the dialogue, and the world building.  It was a decent cast and Neil Marshall wasn’t a bad choice for a director, especially since they went an “R” rated route, but without the rest it’s going to suck.  There was no love, no passion, and no care for the product they pushed out. 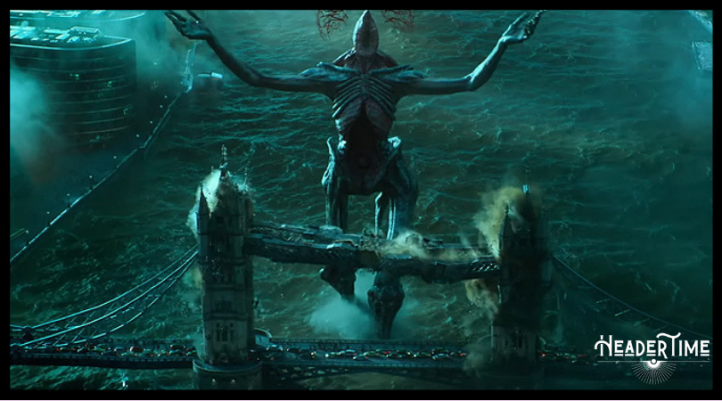 The only thing I enjoyed was the visual stimuli.  Neil Marshall made an incredibly harsh world and the last 15 minutes were full of exceptional monsters terrifying, destroying and brutally murdering humanity.  I must have seen ten different sets of innards in a brief time.  It was great as far as that focus went, but wasn’t enough to make the film worth watching.  Without any care for the characters or outcome of the story it just felt exploitative and gratuitous.

What I did have some anticipation for was the action sequences and even those were mediocre.  There were some high points, but in general it was lackluster.  The fight with the three giants featured a few moments of ingenuity.  But then at some point it felt like a scene from Shrek.  Even with the excessive gore it felt almost cartoonish.  The rest of the action in the film was also a sporadic dichotomy of savagery and unintentional satire.

I didn’t think I could be disappointed and I suppose I’m not.  I am insulted as a movie goer and a human with functioning brain activity.  I’m curious how fans of the comic feel about it, but I doubt even if they moderately followed source material and conceived from there that it would have been successful.  You can have all the cool characters and visual eye candy you want, but if you can’t tell a halfway decent story and fail to entertain even on a superficial level you’re going to bomb.  And this was a bomb of Michael Bay proportions.  Don’t see it unless you’re a bonafide masochist.