Alita: Battle Angel is something I’ve heard whispers about for nearly a decade.  It was on James Cameron’s “I’m making this movie when I make it” list with Avatar and whatever else he’s immersed himself in.  Thankfully he took a back seat and co-wrote the screenplay and produced it. (Something he really needs to do more often) Director Robert Rodriguez took the helm and directed it. He’s no stranger to action or special effects, but this was a pretty enormous project even for him. I regrettably missed the theatre viewing, but luckily our home theatre delivers on sound and sight pretty well so we were able to experience it on the level it was intended.

Alita: Battle Angel is set several centuries in a dystopian future after a near extinction battle resulting in what the common folk call “The Fall”.  The story begins with Christoph Waltz a cyber-doctor who discovers an abandoned cyborg in a scrapyard in “Iron City”.  He builds her and brings her back to life and when she awakens she has no memory of who she is or where she came from.  Alita tries to find her place in this new world and we get to join her on this quest of self discovery.  We explore and learn about the world through her eyes.

Alita: Battle Angel wasn’t a groundbreaking concept and didn’t break any barriers in storytelling.   The characters weren’t exactly complex either, but the actors did a wonderful job selling it.   They made you care about what was happening.   The events transpired organically, character development was allowed to happen and the action sequences kept the suspense alive and building.  If you’re going to tell a relatively straightforward story you need to make it entertaining.  Alita was successful in that.

I got to see some of the best visual effects and action sequences I’ve seen in awhile.  The “Iron City” didn’t look like it was Earth.  The society, the architecture, and the remnants of what looked to once be a magnificent dynasty was awe-inspiring.  I found myself taking in everything I could look at not wanting to miss anything.  The mix of cyborgs, synthetics, and humans was no longer a fantasy.  It makes you wonder if that will eventually be “our” future if we make it that far.

The only complaint I have was this world was too pretty.  It’s described as an essential dump zone for the lesser of the human race who will never rise to the floating city above (not very subtle).  Yet, it’s kinda beautiful.  Even the villains are bright and interesting.  This “ghetto” was a place I wanted to live, even with the dangers and oppression.

The style of fighting varied between each character, but was unique to each one, and Rodriguez knew when to use CGI and when to use practical effects.  With all of the cyborgs and animatronic’s it gave him a lot of liberty to lean on CGI, but the combination of both was seamless.  There isn’t really a way for me to express how much of a relief it is to see effects and action done well. 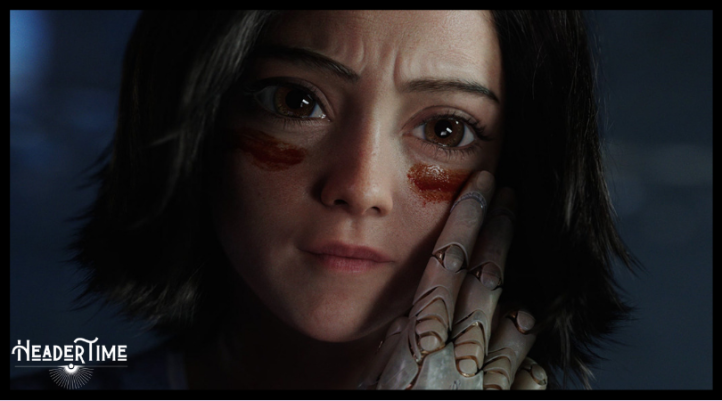 The character’s were a bit one dimensional, but even with relatively vanilla stories and some cliche twists about all of their pasts and identities it was still interesting to watch because they were there to either root for or as functioning plot devices.  You aren’t going to be surprised by any of the revelations, but it isn’t going to ruin the ride either.  When you have Christoph Waltz, Jennifer Connelly, and Mahershala Ali you get nothing but the best.  They played their parts as seriously as any of their more dramatic roles.  And let’s give it up for Ed Skrein.  The guy might be eye candy, but he is also a delightfully fun villain, anti-hero, or coat rack.

The best summation of the films influence I can think of is “Rollerball” meets “Death Race” meets “Borderlands.”  It niche is with a teenage or adult audience that digs science fiction.  Mostly, it was just a lot of fun.  Hell, it even had my absolute most hated movie cliche:  KISSING IN THE RAIN and I forgave it.  I’m hoping for a sequel and Cameron and Rodriguez have suggested that the film could lead to multiple sequels. but I don’t think it did exceptionally well at the box office so we will see.  However, there is a MUCH better chance if Cameron stays mostly behind the scenes.  Hopefully he let’s Rodriguez do his thing again.  Definitely recommend this for a fun time!