Game of Thrones Special: “The Battle Of Winterfell”

We’ve been waiting for the “Battle of Winterfell” for a long time.  This showdown with the Night King is something bloggers, fans, and conspiracy theorists have been discussing for years.  We’ve wanted to know the how’s, why’s, and who’s of the Night King and his not so merry army of undead.  We got our answers and at great cost, even if it wasn’t as great as some of us predicted.

This special post will be full of spoilers, including a breakdown of the best and worst moments, which of my predictions came true and did not, where we stand now, and what will come in the next three weeks.  After a weekend of “Endgame” and “The Battle of Winterfell” we all could use some hugs, but even with Cersei waiting for us, there is a lot more hope than I thought there would be at this point, but is that a good thing?

And So It Begins

No time is wasted from the first scene in.  It’s all business, everyone quietly heading to their battle stations, most including some of our most ferocious warriors looking terrified.  Some of our favorite characters are on the front line, and our two generals Jon and Dany overlooking the scene from above.  The army massed outside Winterfell looks impressive and in fact is.  But we know there’s a much bigger Undead army coming our way.  There is no dialogue until Lord Commander Edd takes a poke at Samwell Tarly, who in spite of his own tremendous fear still made his way to the front.

Sansa, Tyrion, Missandei, Gilly and co. head to the crypts. (This is one of those moments I have a hard time with…….guy raises the dead, hiding with the dead wise much?  And no one questioned this?) and we see our beloved Ser Jorah at the front of the Dothraki hoard with their dragon glass Arkh’s looking scared.  As one of Joss Whedon’s character’s once said,

“When scary things get scared: not good.”

All you can see is darkness ahead, even from Dany and Jon’s vantage point.  Many thought Melisandre would come with an army of the Priests of R’holler.  There was no army, just the red lady, but she wasn’t without some aid.

It is here we experience the struggle of the battle from the perspective of our protagonists which is both disorienting and terrifying.  I believe was the intention.  Here, Melisandre does some bad ass fire stuff and our Dothraki give us a smidgen of hope with their burning swords, but as they charge into the darkness with Jorah and Ghost along with, we can see nothing.  Our point of view is from the front line and from Dany and Jon’s vantage.  Slowly, each light is snuffed out until there is none left and there is silence which is deafening.  We see a few horses and surviving Dothraki returning with Ser Jorah who looks worse for wear.

This sets the tone for the next 65 minutes and they are pure tension.  As the wights charge it seems what most of us felt was inevitable: everyone will die.  And many do in this onslaught, most notably Lord Commander Edd saving Sam. However, he was the only sacrificial main in this initial attack.  Even so, that doesn’t lighten the mood.

All of the defenses hold for a time, but with each bit of footing lost the sense of dread becomes even heavier.  For the first time in 8 seasons you really feel like everyone is fighting to their deaths.  Except this time you believe they will meet them.

Big Character Moments in The Battle of Winterfell

Highlights of The Battle of Winterfell What I Got Right and Wrong

WAY more people survived than I expected.  Either because they are waiting for the battle of the realm or they are just losing some of their nerve with the bigger audience.  I was convinced Jon wouldn’t survive and I was dead wrong. HA!  Jorah, Edd, and Beric were all on my list and Lyanna was a maybe.  I am in utter disbelief that Tormund and Greyworm are still alive.  I thought Rhaegal was dead, but people are saying that both dragons survived.  Our death count is minimal though each sacrifice was tremendous.

I was right about Arya, the Night King, and the Dagger.  If only I had guessed the Godswood I would have been the Game of Thrones Clue champion.   I was half right about Melisandre, because neither Arya or Davos killed her. I was correct about Theon, but I think we all saw that coming.

What I’ve learned is the answers to everything have always been right in front of us.  Perhaps not in neon lights, but they have been there.   This is what sends us big nerds into conspiracy theory mode and start looking like Charlie from “It’s Always Sunny” in the mail room.  Whenever I’ve come back to my core instincts and simplify the story based on what’s happened and the characters it becomes much clearer.  I’m not the most clever person, but either way it’s a ton of fun to make predictions, right or wrong. 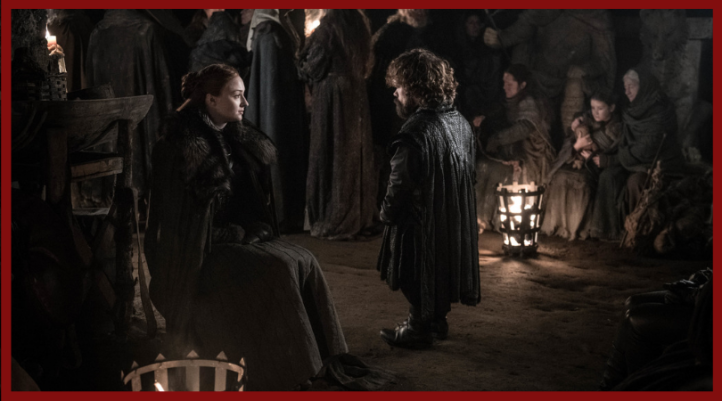